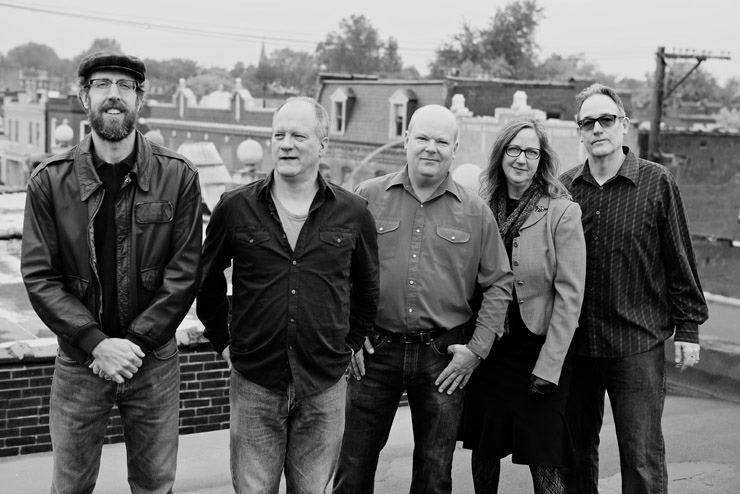 Christmas comes but once a year, and there’s much to be said for the celebrations, the gifts, and the gatherings with family and friends, which take place each December 25th. Still, in St. Louis, at least, the truest spirit of the holiday has been found in the annual Rough Shop Holiday Extravaganzas held on a couple of nights in December for the past 10 years. A mixture of holiday classics, obscurities and delightful originals are performed by the band’s five members, aided by a growing assortment of talented guests.

A couple of years back, Rough Shop documented the magic of these shows with its first holiday CD called “Just Because It Was Christmas.” Now comes a second release, “Lit Up Like a Christmas Tree, ” this time on both CD and LP, with 13 more songs exploring the magic, the love, the joy, and yes, the heartbreak of the Yuletide season. With neither a trace of ironic distance nor a hint of cash-counting cynicism, Rough Shop and friends embrace the concept of Christmas music as something every bit as complex and emotionally rich as any other kind of song.

John Wendland, rhythm guitarist and one of potentially five lead singers in the five-person band, has an imposing collection of Christmas music. We’re not talking just a handful of carefully selected Rhino Records compilations; Wendland has piles and rows of long out-of-print holiday LPs, 45s, and CD reissues from virtually every musical genre in the United States and Europe. His enthusiasm for the musical topic is thoroughly contagious, and thus the love has spread to his bandmates, and to the musicians who lend their voices and instruments to the shows and albums.

For “Lit Up Like a Christmas Tree,” Andy Ploof, a brilliant lead guitarist and multi-instrumentalist, contributes three solely-composed originals and a co-write with Wendland. Ploof’s writing, always strong, has grown by leaps and bounds in recent years, and these songs are gems. “Christmas Isn’t Like Any Day” opens the album with a pseudo-Spectorian feel that simultaneously embraces melancholy and exultation, no mean feat to accomplish. “Santa, What You Got in the Bag” is a playful, slightly snotty look at a greedy child set to a seriously catchy jazz tune. “A Christmas Snowfall,” sung here by guest Steve Carosello of St. Louis band the Love Experts, is as mysterious as a blustery night of precipitation can be when matters of existential crisis, the intangibility of love, and religious questions are put to an elegantly gorgeous tune. “Merry Christmas Everyone,” the song written with Wendland, offers as succinct a justification for the entire project: “There’s simple beauty in the words we sing/That come around this time of year.”

Wendland contributes only one song written all by himself, but “Snowbound Girl” is a potential seasonal classic. Here, he pits the dreams of Christmas miracles against the realities of everyday struggles, and if neither side comes out a clear victor, hope at least seems worth holding on to. And, with the backing vocal harmonies of bassist Anne Tkach and guest Danielle Aslanian providing a delirious response to Wendland’s questioning calls, and the swelling of the band led by Jon Parsons’ organ chords, this song has quickly become one of the highlights of Rough Shop’s repertoire. Wendland also credits himself with a co-write on “Gimme That Twine” as he takes jazz singer Jon Hendrick’s “Gimme That Wine” as a template for a new tale of a wrapping-paper shortage. The tongue-in-rosy-cheek song pits a desperate husband against North Pole elves trying to meet their quota by stealing from normal people. It’s something of a triumph. Equally triumphant is his vocal on a cover of the unjustly obscure “North St. Grande” by English band Stackridge.

Keyboardist Jon Parsons contributes a rare song to Rough Shop with “Christmas at the Super 8,” a supremely clever little thing about a man who can’t get home to his family for the holiday. He also sings lead on Marvin Gaye’s “Purple Snowflakes,” and co-lead with bassist Anne Tkach on “I Wish You a Merry Christmas,” a Carole King/Gerry Goffin obscurity originally recorded by Big Dee Irwin and Little Eva.

Three songs come from outside the band, but from within the roster of Christmas guests. Steve Carosello co-wrote “Sick Again” with his sometime musical partner Charlie Brumley. It’s a delicately unfolding simple song with only piano accompaniment, and it will break your heart. Fortunately, Merv Schrock, singer of St. Louis soul-rock band Ransom Note, has two happier gems of soulful Christmas exhortation, “Christmas Time (Come On Over)” and “Soul of Christmas,” to cheer you back up. Both songs bring out a funkier side of Rough Shop, as Schrock urges an assemblage of Christmas revelers to forget their troubles in the former, and conjures up a mystical connection between all celebrants through sheer beautiful repetition in the latter.

Rough Shop has now released five full-length albums and two EPs since forming 10 years ago. Two of those albums have been Christmas music. This is a commitment to the format rarely seen in musical history. May there be many more of both in the years to come.

Riverfront Times feature on Lit Up Like a Christmas Tree

Long Island Pulse review of Lit Up Like a Christmas Tree

Riverfront Times review of Beneath the South Side Bridge

Riverfront Times review of Just Because It Was Christmas

There Stands the Glass review of Just Because It Was Christmas